When growing up I only really recall three people who seemed genuinely at peace. Not folks who had everything they wanted or enough money to support any cause they wanted, I mean people who seemed content with themselves. These people loomed especially large in mind because of the sharp contrast of all the wealth-worship of the 80's & 90's. To begin with, Bob Ross and Shel Silverstein we're absolute game changers in my childhood. Their sheer talent and the way they made it accessible was an artistic inspiration that I'm still effected by to this day. The other huge inspiration did stress the importance of imagination, but in the big picture he just seemed like a great person. That man was the star of the Mr Rogers Show on PBS, Fred Rogers. 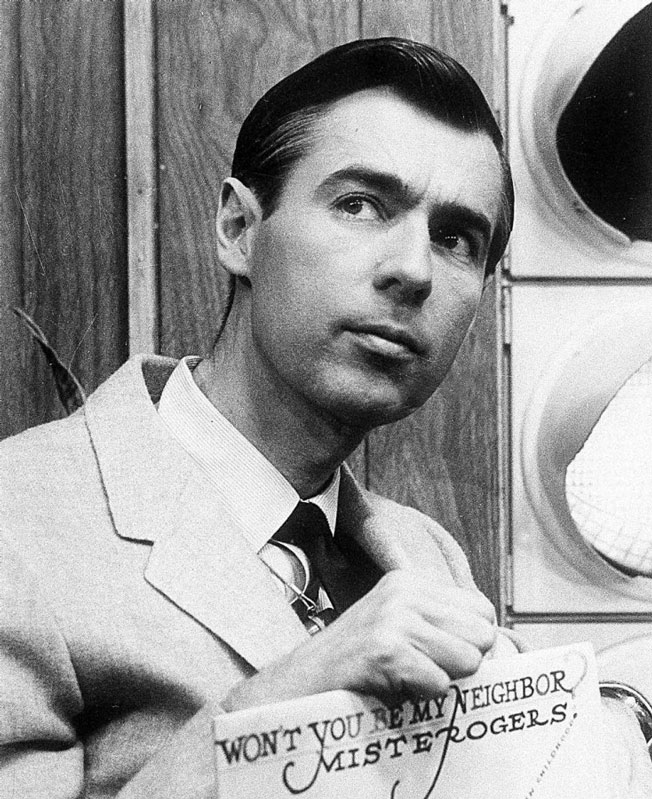 This formerly trained minister approached Pittsburg's WQED in 1968, because he was upset with the mindless children's programming he saw saturating television. He developed and pitched Mr Rogers Neighborhood himself with little experience and even wrote all of the shows music for the life of the series. That show went on to run for over 30 years nationwide, which is an absolutely incredible lifespan for a tv show. If you grew up in the 80's or 90's, you probably loved the Mr Rogers Show, but you may not be aware of all the great things he did when the cameras were off. Before highlighting those behind the scenes moves, I've got to share some incredibly telling Fred Rogers quotes and one clip that perfectly captures his unique take on life. While picking my top 5 Fred Rogers quotes was not an easy task, here are one's that stand out most in my mind.

Now you may be saying to yourself, "All these quotes are great, but Mr. Rogers did not keep it street"... And that's where you're wrong. In the late 80's he welcomed a young B-Boy on to his program and allowed him the opportunity to show his craft to surely confused older man. In my opinion, this moment perfectly encapsulates the magic Fred Rogers brought to the world.

He's not dismissive or condescending, just curious. That intense curiosity balanced with a clear respect for all of gods children coincide to make a pure environment in which both parties can learn from one another. By any stretch of the imagination this kid should be nervous, he's on tv... but he's not. Not to over-generalize, but this is what's missing from the world. I try to imagine a kid in this situation today and I can't help but think of off camera parents stressing him out, some agent insisting he plug the website, and a look of sheer terror with the camera's red light. This is a large part of what I believe is missing from the world and something we could use more of.

Besides being one of my childhood heros that spoke with absolute authenticity, the other great aspect of Fred Rogers was his passive stance towards violence. Like every other American child I read plenty of stories about pacifism (…mostly Gandhi and MLK stories), but you rarely see it in action. Ironically I do remember seeing plenty of real-life bombs exploding, but not a lot of pacifism or peaceful rhetoric. If you could use some positivity, Fred Rogers testifying to Congress on behalf of federal funding for childhood arts is a great place to start. He was also awarded the Presidential Medal of Freedom, a Peabody Award, four Emmys, and roughly forty honorary degrees. On off hours, he was a trained general aviation pilot, swam every morning, raised two (probably adorable) sons, created the Fred Rogers Center, never smoked or drank, and explained his vegetarianism by stating "I don't want to eat anything that has a mother". While I could ramble off facts about his life, I think the largest impact was that he exposed millions of people to what a truly peaceful person is like. Before the Gulf War he even insisted on shooting a PSA letting all the children of the country know that the families overseas would be protected as much as humanly possible. While that may not be technically accurate, you have to respect the intention and I'd bet my life he beat down doors to have the military promise not to make a liar of him. Seeing an adult that cared so much and was downright excited about creativity planted a seed in minds everywhere… His impact is truly immense and immeasurable.

While I'm glad he didn't just stick to preaching, I'll bet if he were my preacher I'd probably still be in church every Sunday. While the previous quotes and examples just scratch the surface, I hope you liked my favorite Fred Rogers quotes and understand why he was so damn inspirational while growing up. I think it goes without saying, but the world could use more Fred Rogers’ right now. Hopefully, there are kids right now watching Mr. Rogers Show re-runs and seeing just how powerful genuine honesty and sincerity can be. If nothing else, I'm sure glad he was around while I was growing up and I'm sure any kids I have will think the same.