Good photography can evoke plenty of emotion and candid images can sometimes do the difficult job of conveying who a person really is. Major politicians make so many appearances that it's hard to think any picture is unplanned, but when you see a candid picture you know. The picture and clip I've included below didn't get a ton of airplay, but to me they're some of Obama's coolest moments. They show why I like Obama, but they also convey very well that when a genuine moment is captured it's easy to see.

When it comes to President Barack Obama, I must say I'm a little torn. I certainly don't agree with all his decisions, I feel like he's been overly conciliatory at times and has really let progressives down. That said, I think he's a very smart guy and an all-around decent human being. While that shouldn't be high praise, for a politician it certainly is. At the risk of reading too far into things or possibly oversimplifying, this shot of his team in the volleyball locker-room at the University of Texas in Austin capture why I like Obama... in one picture. While I'm sure his Trip Director Marvin Nicholson didn't appreciate it at the time, I'm sure he can look back and smile. 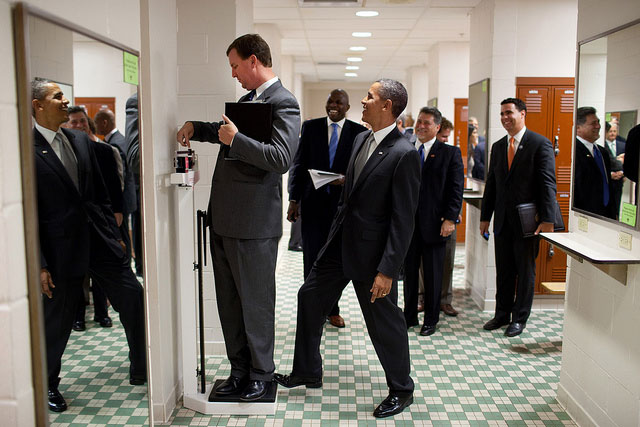 Any comedy fan looks forward to the White House Correspondence Dinner. It's morphed into something closer to a political roast, then a formal dinner. While Seth Meyers did a great job of working the room (especially on the Donald Trump front), it's incredible to think about how great Barack Obama's speech was when you take into account all of the things happening outside of the room. It's not just that Barrack Obama has solid comic timing which is rare for a President, it's that he does so while Navy Seals are in arms reach of the US's #1 target Osama Bin Laden. After years and years of Bush making idle threats that faded into false indifference & a team of people pushing color codes of how afraid we should be, here we have a leader putting a stale room in tears and achieving a huge tactical military victory at the same time. The "war on terror" has a ton of grey areas, but Bin Laden playing a huge role in murdering thousands of innocent people is pretty black and white. With all that in the background, his performance is infinitely more impressive. This video clip captures why I like Obama in one moment.

So there we have Barrack Obama achieving a huge priority of his candidacy, raising no suspicions in a ballroom filled with media agents, supporting a relatively respectful way of disposing of his body from a religious perspective (especially considering the religious zealots who generally respond to hair-trigger provocation), and he still killed it. Even watching in hindsight it's hard to believe he knows anything about it. I literally checked for multiple hard sources to prove he did. In one moment, that crystalized the difference between our past presidents. I think that's one of Obama's coolest moments and anyone frustrated with Bush, must have found the contrast striking.

As previously mentioned, Obama has been disappointing and way too "business friendly". That said, he seems to be a decent person and ethically miles beyond the corruption of Bush and his peers. Maybe it's just a baby step in the right direction, but these images & videos capture why I like Obama and hopefully soon we'll be demanding leaders that are both decent and thoughtful advocates of change. Whatever your political beliefs, I think it'd be hard to argue that these aren't a couple of Obama's coolest moments.